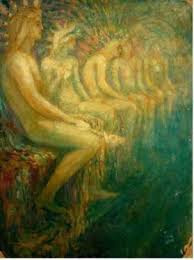 In Tir-na-Moe, the land of the Living Heart, Brigit was singing. And the other gods, drawn by the resonance of her voice, stood in a circle around her - Manannan the Sea Lord; Midyir the Mighty; the Dagda (who is also called the Green Harper); Gobinu the Wonder Smith; Nuada, Wielder of the White Flame; and Angus Og, the youngest and most playful of the gods.

Brigit's song was charged with depth and yearning, of pain and regret mingled with hope and the hint of a mysterious, softly approaching joy. And at the end, Angus Og said, 'Rich and strange is your song, O Brigit. I felt, as I listened, that I was falling down and down, fathom after fathom, until Tir-na-Moe itself was nothing more than the memory of a dim and distant dream. And the further I fell, the more I sensed that it was not yourself singing but someone or something else. Tell me, O Flame of the Two Eternities, who or what was it singing that song?'

'It was the Earth,' replied Brigit.

'The Earth!' cried the Dagda. 'But the Earth is in the pit of Hell. It has no beauty, shape or form. Serpents crawl on its surface and all is chaos and despair.'

'Yet the Earth has dreamed of beauty,' said Brigit. 'There is something high and pure trapped beneath the murk and gloom, and it is calling to us, the Shining Ones, to set it free so it can shine like the diadem it is and take its rightful place at the heart of God's creation.'

Angus shook his head. 'I wish I had never heard your song,' he said. 'Now that I have, I cannot take the Earth from my mind and I am unable to return to my games with a clear conscience.'

'Then come down with me,' said Brigit, turning to him, 'and help me make the Earth afresh. You are clothed in all the glories of the Sun and have nothing to fear and everything to give.' But Angus just smiled and plucked a blossom that turned into a dove and whirled six times around his head before vanishing into the sky.

Then Midyir the red-maned shook out his hair and beard, and sparks danced and blazed around him. 'I will go with you, Brigit,' he declared. 'I will strike the serpents and clear a space for you to spread out your mantle and renew the face of the Earth.'

Then all the gods, except Angus, cried out, 'We too will come with you, to end the Earth's agony and release the beauty held captive by the dark.'

Angus, however, still demurred. 'I would come indeed,' he said, 'if only we had the Sword of Light.'

Then Brigit laughed and clasped him by the shoulders. 'We will not only have the Sword of Light,' she said, 'but the Spear of Victory, and the Cauldron of Plenty, and the Stone of Destiny too.'

And all the gods, including Angus, shouted out as one, 'We will take the Four Jewels.'

So Angus set out to fetch the Jewels and bring them back to the gods. He flew first to Findrias, the wind-washed, dawn-streaked city in the East of Tir-na-Moe, which holds the Sword of Light. Then he went to Gorias, the flame-bright city of the South, where he took the Spear of Victory; then West to Murias, the city of sunsets, flowing waters, and the Cauldron of Plenty; then onto Falias, the city of adamant and stone in the far North of the world, where the Stone of Destiny is to be found.

When all was ready, the Shining Ones descended on the Earth like a rain of stars. Midyir took the Spear of Victory and cut a swathe through the serpents, thrusting them into the sea and making space for Brigit to lay down her mantle. She took it off and set it down, rolling it forward and out - a silver, billowing carpet tinged with flame. On and on it rolled, pushing the waters ever back, until the mantle appeared on the point of wrapping the whole wide world in its warm, nurturing embrace. But then Angus, his playful spirits restored, jumped down on it and called on the other gods to join him, which they gladly did.

The Dagda, laughing as he ran, reached into the Cauldron of Plenty and hurled chunks of green putty into the Earth's dark air. Angus, with his own hands, merrily shaped and moulded the green, but then Mannanan, the Sea Lord, saw the serpents preparing an attack from beyond the shoreline. So he stopped the mantle's rolling, bade the gods be silent, took the Sword of Light, and held it high above his head. And a great wave three times his height, of jet black flecked with green, reared up before him, poised to come crashing down on top of him and all the gods and the new world they were making. But the Sword shone in the darkness with a fierce and burning light and the great and venemous wave drew back across the sea as if in fear and trembling.

Mannanan held the Sword higher still, and a second wave rushed up - white and blue like a sea horse - the same height as the Sea Lord. And it broke and crashed before it reached him, bowing down, it seemed to the other gods watching, in submission. Then came the third wave - a quiet gentle ripple like a whisper or a breeze. And then there was silence -  stillness, peace, and a dawning, rising, spreading light, which little by little illuminated the world the Shining Ones had just created.

They looked around and beheld a fresh, fertile land of green hills, valleys and trees. And they were amazed at what they had accomplished.

Then Brigit took the Stone of Destiny and laid it down at the centre of the island. As she did so a tinkling, bell-like music resounded from the Stone and the new world started to run with the happy splash and tumble of a million rivers, streams and rivulets. 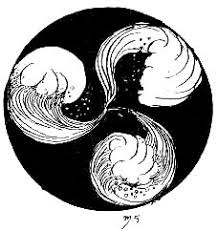 Note - I told this story last Wednesday (17/06/19) at the monthly storytelling night at The Blue Bell pub in Conwy, North Wales. The above is an almost word for word transcript of my retelling. The story is based on the opening chapter of Ella Young's Celtic Wonder Tales (1910), The Earth Shapers. The illustration at the bottom of the piece is from the end of that chapter and was drawn by Maud Gonne, a classic poetic 'muse' (and an Irish revolutionary, suffragette, artist and actress) who inspired a number of W.B. Yeats's finest poems, e.g. No Second Troy. The painting at the top is The Kings of the Faery Race (c.1900) by the great poet, artist and mystic, George William Russell (1867-1935), better known today by his nom de plume, AE.

Posted by John Fitzgerald at 12:14 PM